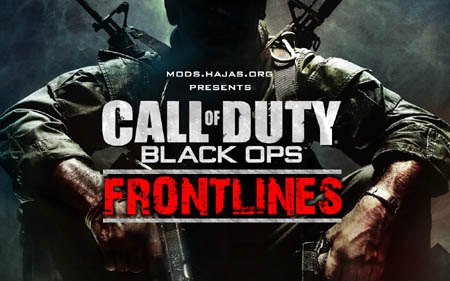 Black Frontlines is the Frontlines version to Call of Duty Black Ops but with the only things that was missing in COD4 Frontlines R3L04D, COOP gameplay and Bots to fill the servers to let you play with few friends or even alone. With this main idea, Black Frontlines started with some of the most important features which made Frontlines famous, they were ported and improved into Black Frontlines, aside the known Realism and Gameplay Balance was already ported several great features such as Airborne Support with the Airborne Gametype to all maps, the Intelligent Server with all their dreamin' features and Help Mode just to name a few, were also added brand new amazing features like the Airborne Mode to let you play all gametypes with Airborne Support, the COOP Missions to let you play side by side your friends in tuff missions against Bots, and of course an improved AI which will make you doubt if is or not a real player, not only just killing enemies but also completing objectives, saving wounded teamates and really working as a team. With that and much more Black Frontlines was released to be part of the Frontlines Series, and with great chances to be the most perfect FPS game ever released one day if the engine limits let me do such thing.

. Frontlines CTF gametype, counts each capture as a match point
. Chopper Points giving 10 point to each shot hit in enemy Choppers. 250 pts for explosive hits.
. You can hit the Choppers of your own team! Same points as above but NEGATIVE!
. Anyone can be wounded (LastStand) accordly with the place of the shot, weapon, etc...
. You will get some problems when be wounded, like close your eyes for while to avoid unreal reflexes
. Wounded you can switch weapons, throw grenades, etc...
. Only a MEDIC can heal wounded friends with REVIVE in their heads
. Frontlines HelpMode (bots can play and save, but are too stupid to keep firing into wounded soldiers)
. All Wanger gametypes converted to Frontlines. You can play them in the SAME server/rotation.
. Frontlines Coop Missions (play Cooperative Missions in MP maps! With or Without Help Mode!)
. Frontlines Classes (Will give random GOOD weapons to the default classes)
. Frontlines Killstreaks (Will give random or selected Hardpoints to the default classes)
. Medic Class
. M16 is now Full Auto
. Airborne Support to all 26 maps (all DLC inclued!)
. Airborne Gametype (MP and COOP)
. Airborne Mode to ALL gametypes and Coop Missions
. Squad Mode to ALL gametypes

. HARDLINE perk make you now a MEDIC, the killstreek -1 doesn't work anymore.
. HARDLINE PRO perk will heal faster and the killstreaks options will remains as the original
. SECOND CHANCE and SECOND CHANCE PRO perks will give you extra time wounded
. FLAK JACKET perk make you will feel the impact and need time to recover to get up and fight again
. FLAK JACKET PRO perk will make you recover faster and get less damage against fire
. Fall damage improved to avoid unreal jumps
. LIGHTWEIGHT PRO perk will give you less damage in fall damage, but not imune anymore
. HACKER perk will plant/disarm bombs 2x faster than other players
. HACKER PRO perk still can revert/disarm explosives
. GHOST PRO perk can be detected by infrared and sentries.

More info can be found @ Moddb.com or in my forums.